​In preparation
Senator Freeman was welcomed on arrival by Principal, Dr. Edel Greene and Deputy Principal, John Moore, who, through our Log on and Learn initiative, organised the visit. It was with great pleasure that the Senator was invited to see our newly refurbished Meditation Room. The intriguing sensory floor and design promotes serenity and calmness. This was noted by the Senator and in particular the role the room will play in delivering the school’s Wellbeing Programme. St. Mary’s highlighted to the Senator how grateful they were to the O’ Brien Trust for their funding of the project which has evolved in its potential from conception. Further plans to enhance the sensory element of the room were outlined as the school continues to seek funding to develop and enhance its wellbeing resources on offer to students. 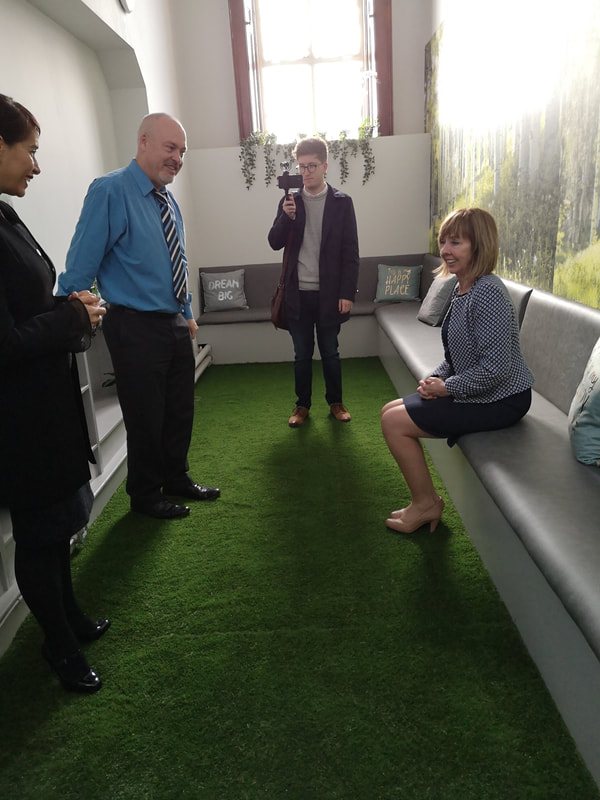 Following a moment of calm in the Meditation Room Joan got the opportunity to gather her thoughts and prepare to face a reception of Second Years who were engaging with the New Junior Cycle CSPE Short Course were undertaking a Classroom Based Assessment on Democracy in Action with particular emphasis on the structure, function and composition of the Presidential Elections. Joan got first-hand experience of the flipped classroom in action as the students’ led the learning competently outlining the various research posters on each candidate, the ballot papers, voter registrar, the ballot box and voting stations. Joan was very impressed by the extent of the students work and their efforts to run a mock election (next week) for all the school, providing the students with the experience of democracy in action. Particularly fitting is that the CBA coincides with the hundred years of women’s right to vote and that the girls of St. Mary’s are actively teaching their peers the significance of such a democratic right.
Second Years worked really hard beforehand to ensure the Study Hall was ready for the visit 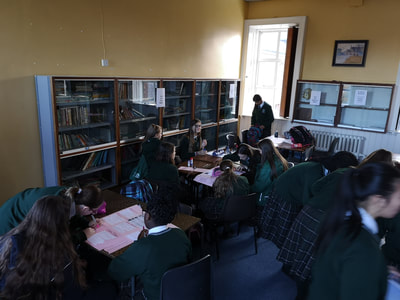 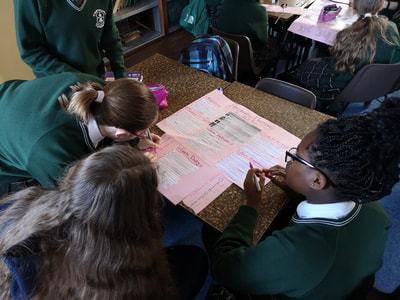 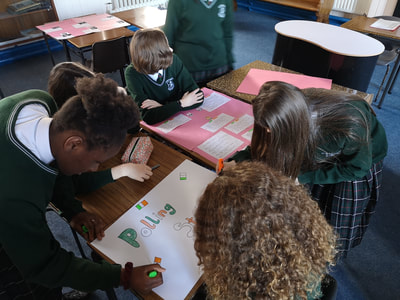 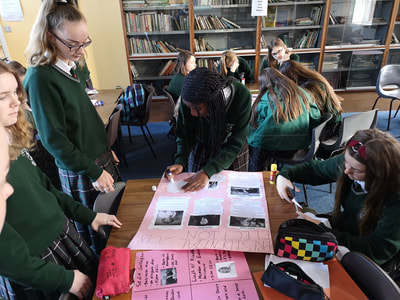 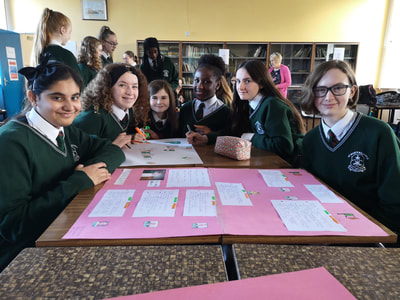 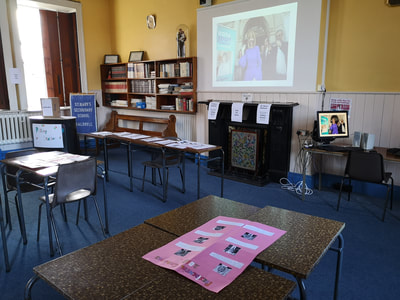 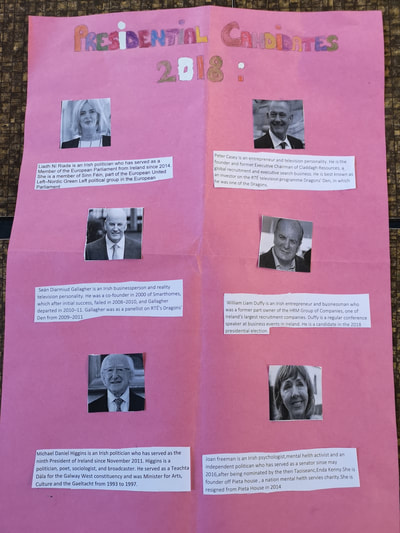 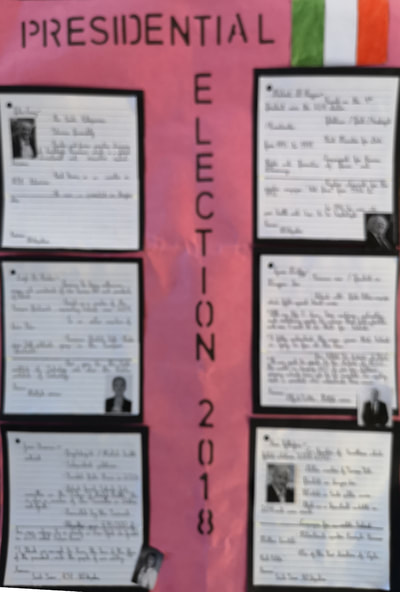 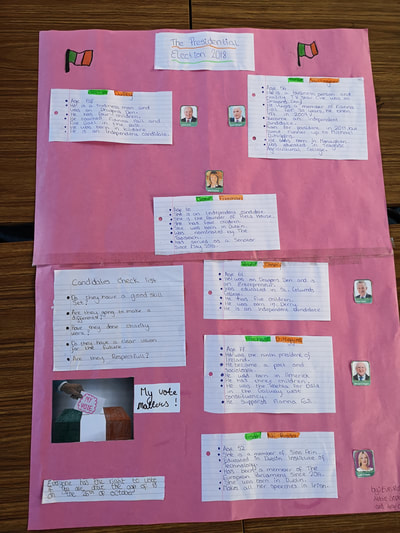 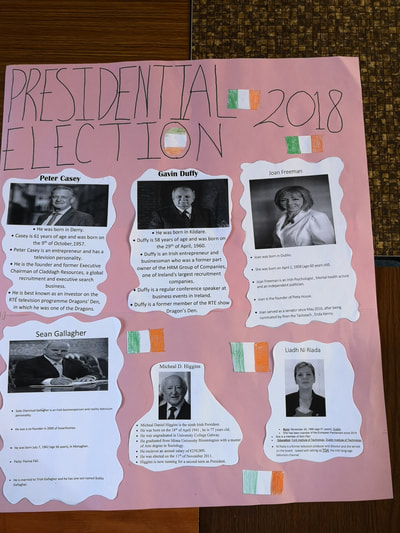 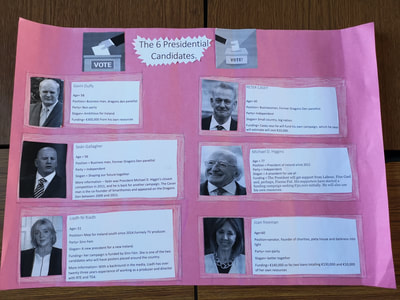 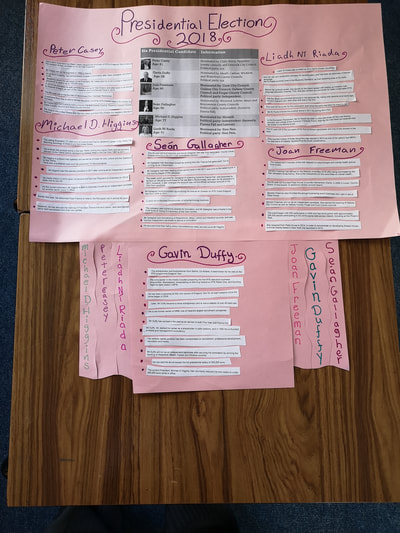 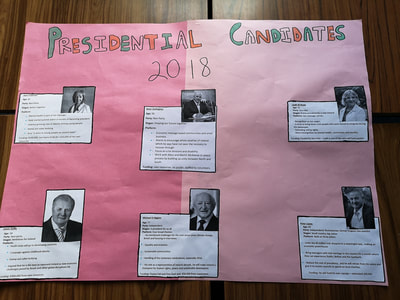 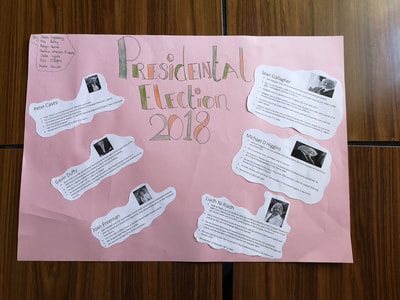 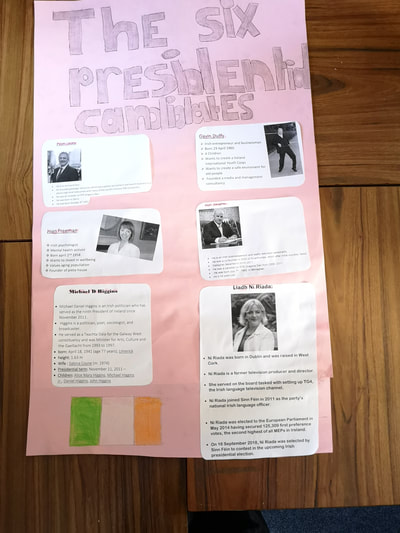 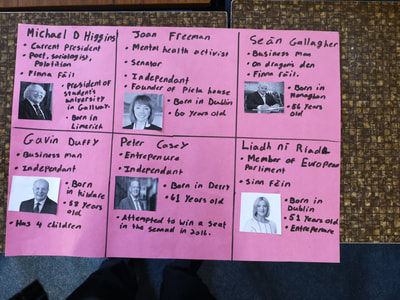 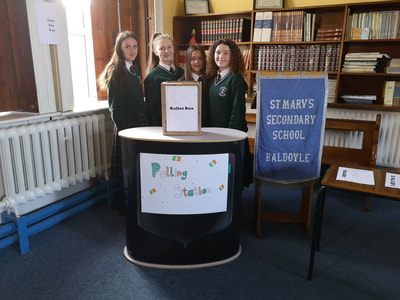 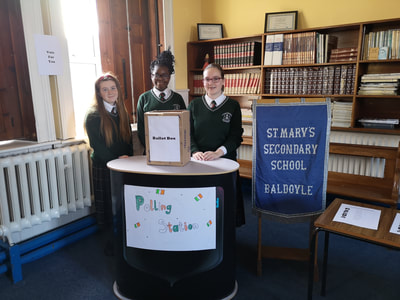 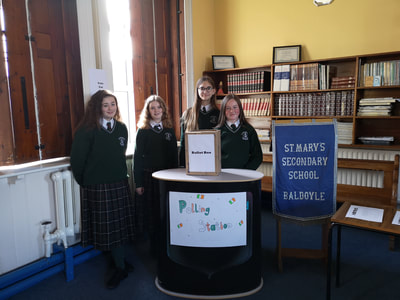 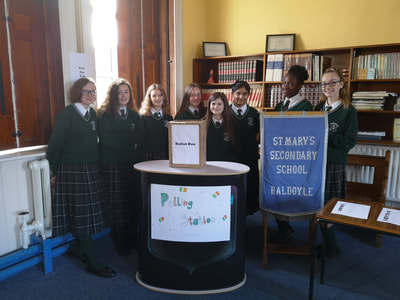 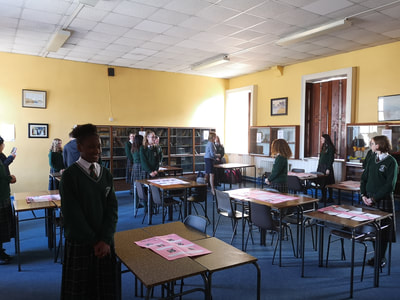 Senator Freeman was particularly attentive to all of the students, speaking individually to each one and was very interested in the girls’ opinions on each candidate, herself included. The students highlighted the depth of their knowledge and digital competence projecting images from Joan’s own campaign.  Joan spoke passionately about her own decision to run for election, her desire to place Mental Health at the forefront of the Presidency and what it meant to be a woman in the race. A session of questions and answers on the Presidential Election followed and despite testing questions on both sides, it was clear that the students had warmed very quickly to Joan. 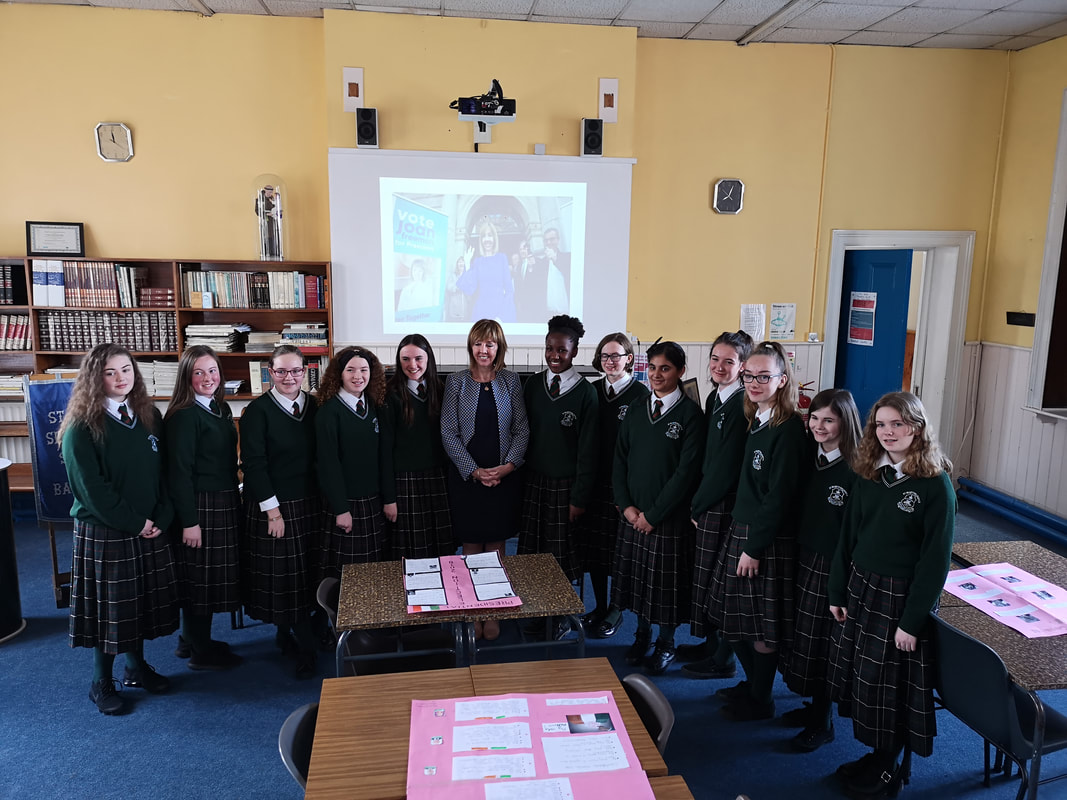 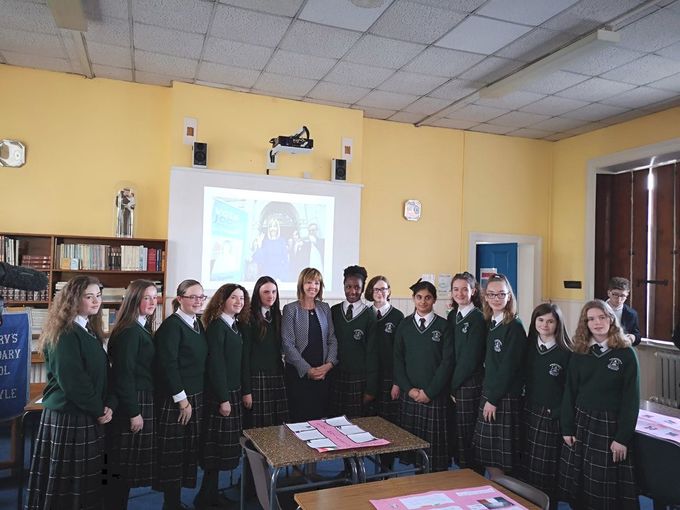 In the spirit of leadership and democracy Senator Freeman’s next port of call in St. Mary’s was to meet the newly elected Student Council members. It was with great honour for the school that the Senator was available to present the Council members with their badges. Once again the Senator gave the girls a great deal of time and fruitful conversations arose on guidance provision in schools, supports and structures needed for student mental health. The school’s commitment to student voice was emphasised as the Council discussed its mandate and plans for its term of office. 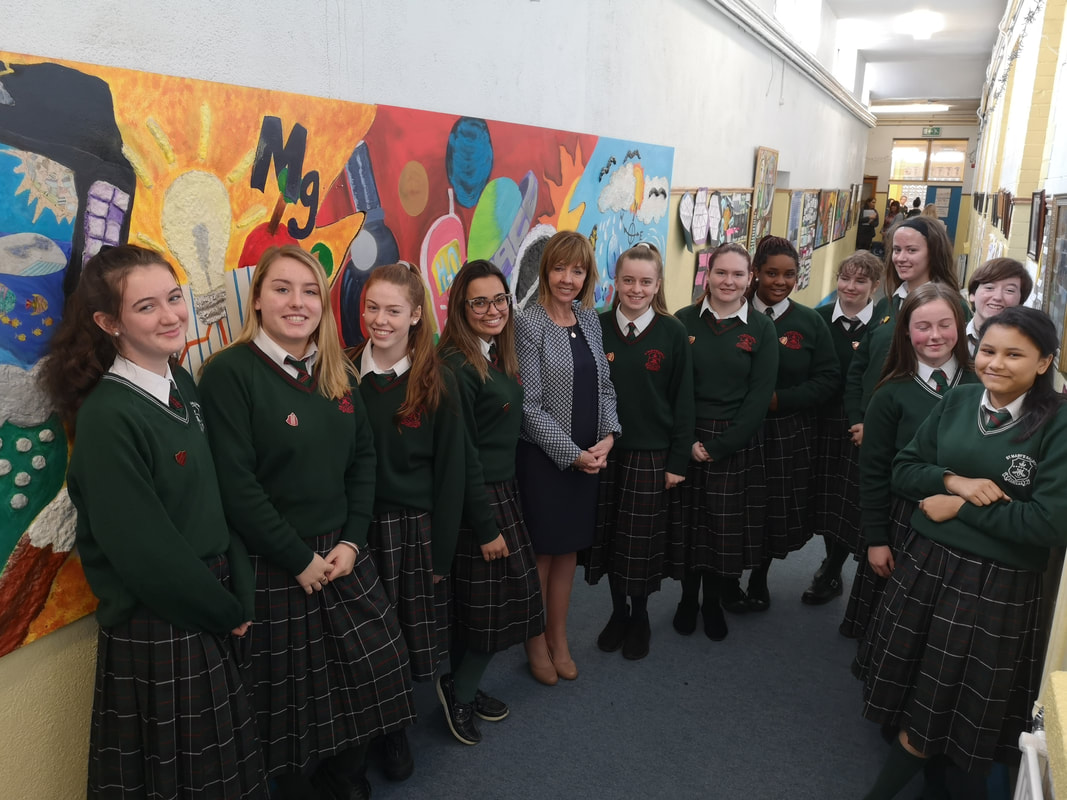 ​The Sixth Year Senior Prefects represented school leadership in the student body and the articulate views of these young women were particularly enriching and for the Presidential Candidate sparked optimism in the future leadership qualities of young women. Joan struck a chord with the Sixth Years as she outlined that one of the most significant things they could do in their lives is to volunteer in the service to others. This was apt as the girls school Crest carries the significant inscription ‘Caritas’ meaning charity, the strong tradition of giving in the school with a particularly generous and conscientious student body. Joan emphasised the impact of loneliness and isolation on people highlighting that over 50,000 people had no one to visit them last year a fact that left a lasting impact on the girls. Having a solution based attitude to problems a lengthy discussion ensued on what could be done in society and by young people to address such wellbeing needs.
​The founder and former CEO of Pieta House was struck by the girls throughout her visit; their astute understanding of the significance of mental health and wellbeing for young people, their commitment to displaying democracy in action, their service to the local community, their skills and technological competence in expressing their opinions and promoting their voice as future leaders in society. The Senator was particularly encouraging and complementary to the school for its ongoing commitment to Mental Health through its wellbeing programmes, resilience academy and participation in Darkness into Light. Senator Joan Freeman was joined in her entourage was accompanied by Harry McGee, of the Irish Times, reporting on the visit, who was very taken with the students and the school. By all accounts it was an impressive visit all round.
Edel Greene, the Principal thanked Senator Joan Freeman sincerely for taking the time to engage with the students of St. Marys and wished her the best in the forthcoming election. Regardless of outcome Senator Joan Freeman would always be welcome to come again. Most importantly the girls of St. Mary’s hoped that her voice on the significant issue of Mental Health would never be silent or drowned out as the most vulnerable in our society needed that advocacy. An advocacy that the girls of St. Mary’s hold dear. Best wishes Joan from St. Mary’s.
​The final stop on Senator Freeman’s tour of the school was the Computer Room to engage with the Logon Learn Programme. This community outreach programme runs every Friday when Transition Year Students teach Senior Citizens the many elements of computing: from sending emails, adding photos to emails, website bookings, online shopping and much more. Joan was particularly impressed with the lessons based on using a mobile phone.  Joan spoke to all our “senior students” who not only benefited from the lessons and skills but valued the social engagement, cup of tea and chat with the girls. The large Computer room also had a Second Year Computer Class who impressed with their digital literacy. Senator Freeman was interested in their active Microsoft Specialism Programme where students teach themselves under the guidance of the teacher.  The computer room was a hive of activity throughout the visit as the Transition Year PR Group were busy working away at the group work Computer Stations.
Following the visit, Joan emailed St. Mary's and we are very appreciate of her kind comments
​
"It was an immense privilege and pleasure to visit the school recently and I wish to record my deep gratitude to all of you for the warmth and generosity of your welcome.

I am always amazed and inspired by the extraordinary vision, energy and dedication which so many schools display in the tireless service of the students.

We share the same ideal which is to promote constantly the quality of life and the well-being of all our people and that is a worthy aspiration of which we may all be proud.

May I salute your achievements and wish you continued success with all your endeavours and initiatives.

With renewed thanks and every good wish."
We were absolutely delighted with Joan's video of St. Mary's.
We were delighted to meet Harry McGee, of the Irish Times, who accompanied Joan and reported on the visit and then interviewed Joan outside the school
Harry's report can be seen at
https://www.irishtimes.com/news/politics/joan-freeman-on-the-campaign-trail-in-dublin-1.3672911?mode=amp