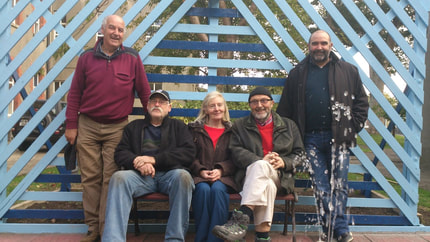 We were delighted with the Pond Restoration Project completed by the Green Fingers Team.  They began work in May by cleaning out the entire pond of water, plants and dirt and a lot more.  The slabbing around the edges was re-cemented and fixed.  Special coloured slabs were placed between the repaired/painted trellis (in Dublin colours). A ramp was put completed at the side and a fountain was placed in the pond.  Water plants are starting to grow while roses were palnted behind the trellis.

Can't wait to see everything in full bloom!

Would love to see some fish.
​Any volunteers?

To support this very worthy cause, the day was designated a Funky Shoes Day.  Students could wear any type of shoes they wanted.  There was great imagination, colour and variety on offer.

Ms. O' Connell went around to all the classes looking for donations.

​In all over €200 was raised.  This will be donated to St. Patrick's Hospital Foundation - Ireland's largest independent non-profit mental health service provider.
St. Michael's House Nativity Show
23 December 2013
With just 24 hours to go before their Christmas Show, the organisers of the "Hey Ewe", realised that there was one vital ingredient missing - the singers! A big dilemma indeed.

They contacted Ms. O Connell who then spoke to Ms. Sheridan and Ms. Rogers.  Students from the Junior Certificate Music Classes were quickly organised to learn and prepare six songs within a few short hours. They worked hard and soon they were ready to perform.

The show was a great success and the girls singing saved the show.  Thanks to all the students involved and to Ms. Rogers for accompanying them and getting them organised on the day.

The staff at St. Michael's House were delighted with the girls and we are very proud of their "can do" attitude.

The Northside People reported this in their edition of 27 December 2013, page 12.
Website Revamp with Jennifer Maguire