The Sisters of Charity 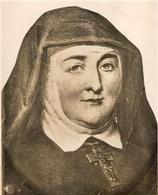 Mary Aikenhead was born in Cork in 1787, her father Dr. David Aikenhead was a Protestant doctor and apothecary and was a very kind man. He had great respect for the poor. Her mother Mary Stacploe was a Catholic. There were four children in the family, three girls and one boy. Being a delicate baby, Mary was fostered out to the Rorke family to improve her health. When she was six she returned to her own home. Mammy Rorke as Mary called her, was a devout Catholic and left a lasting impression on Mary, with whom she shared her deep and simple faith. Mary’s father Dr. Aikenhead became a Catholic on his deathbed in 1801 and the following year at the age of fifteen, Mary also became a Catholic.

For a number of years following this, Mary moved in a circle of better-off middle-class Catholics who were religious, sociable and hospitable. Around this time she developed a deep compassion for the poor and a consciousness of their need for education. When she was twenty-five, Mary and her first companion, Alicia Walsh travelled to York to begin their training for religious life. They were accompanied on the journey by Archbishop Murray. Having completed their noviciate, they returned to Dublin in 1815 and set up the first community of Religious Sisters of Charity. Thousands of dedicated women have since followed in their footsteps, inspired by their example.

What has Mary Aikenhead to say to us who are involved in education today?

Her motto:‘Caritas Christi Urget Nos’ (“the love of Christ urges us on”), leaves us a rich legacy to follow. She desired to give to the poor what the rich what the rich could buy for money. She invites us to reach out to all those in any kind of need – material, spiritual or intellectual.

Mary reached out to all, regardless of religion. She invites us to embrace the diversity of our world today in all its complexity. Mary pioneered all the many and diverse works of the Congregation under the ever-watchful eye of Providence. She believed it was all God’s work and that He would bring it to completion in His own way and in his own time. She was never disappointed. Even when she needed funds to open hospitals and to serve the starving poor, gracious benefactors helped her in most unexpected ways. She invites us to trust in God today in spite of all our difficulties.

Mary valued education in its broadest sense. She encouraged the young girls who had to work in factories by day to go to school in the evening. She got her sisters to organise classes for them. She believed we should learn from each other and benefit from those more experienced. For example, when she set up the first school in Gardiner Street she advised the sister in charge who was finding it difficult to control the pupils, to seek advice from the Christian Brothers.

She was always conscious of the bigger picture and had a universal vision for all. The first women religious on Australian soil were Sisters of Charity, sent by Mary in 1838 to work with women convicts.

Mary was a gifted letter writer and many of her inspiring letters to her sisters written when, through illness, she was confined to a wheelchair, are now to be viewed at are Heritage Centre in Harold’s Cross. She invites our young people to value literacy. Mary loved young people and had a great sense of humour. Even when she was invalided she was often seen surrounded by small children from the local schools.

Mary was a true visionary but without the help and the wise advice of her sisters in the congregation and of others who guided her, as well as the support of all those kind benefactors and those on whom she depended when in poor health her vision could not have invoked such a lasting response. No doubt Mary believed passionately in the seanfhocal and all it implied “Ar scáth a chéile a mahaireann na daoine”. Mary invites us today to build good relationships so that we can be true partners in education.

During her prolonged illness, nature was one of Mary’s greatest consolations. As she watched the evening sunset from her bedroom in Harold’s Cross, God’s signature in the day past, she was fully assured that the love of God would rise before the sun. Her message to us today is to treat with respect and reverence all that God has created.

Finally, Mary speaks to us as a woman of enormous vision, undaunted courage, unshakable faith in God’s Providence and joyous hope for the future. She was a woman of deep compassion for all humanity but especially she will be remembered for her tireless efforts on behalf of the poor. Mary Aikenhead died in 1858

St. Mary’s Secondary School, Baldoyle, was part of a very special and unique occasion on Sunday, the 1 March 2009.

A Special Celebration Mass was held in honour of the 150th Anniversary of the death of Mary Aikenhead, the foundress of the Sisters of Charity.

The special ceremony, which took place in Our Lady’s Mount Chapel, Harold’s Cross, was televised by RTE at 11.15 am.

The liturgy reflected the international dimension of the Congregation of the Sisters of Charity and had participants from America, Europe, Africa and Australia.  Representatives from various ministries formed the choir and participated as members of the congregation.

St. Mary’s Secondary School, Baldoyle was very proud to belong to this world-wide family.  Full  details on RTE’s involvement were available at www.rte.ie/tv/worship and the mass was also available to view there.
Great News
Corkwoman Mary Aikenhead takes step towards sainthood
Pope Francis has declared that Mary Aikenhead lived a life of heroic virtue, a move which makes her eligible to be promoted towards sainthood.

The Corkwoman founded the Religious Sisters of Charity of Ireland in 1815.

Her 445 sisters continue to work in education and healthcare in Ireland and in seven other countries on four continents.

They have always been committed to serving poor people and became the first women to found a hospital in Ireland when they established Dublin's Saint Vincent's in 1834.

The declaration means that Aikenhead is eligible to be considered for promotion to the status of blessed, which normally requires the Vatican authorities to attribute a miracle to her intercession.

Welcoming her founder's promotion by Pope Francis, Sr Mary Christian, Congregational Leader of the Religious Sisters of Charity, said Aikenhead was a woman ahead of her time.

"All around her she saw the plight of people who were poor and suffering."

"When Mary Aikenhead set up her Congregation 200 years ago, there were just over 100 sisters in Ireland, all of whom lived as enclosed contemplatives behind convent walls.

"Mary applied to Rome for permission for her sisters to take a fourth vow of 'Service of the Poor', enabling them to visit poor people in their own homes; those who were sick and hungry and cold and penniless and no one to turn to.

"With the support of Archbishop Daniel Murray of Dublin, she received the necessary training for Religious Life in the Bar Convent, York and opened her first Convent in North William St in Dublin.

"She and her sisters became the first women religious to visit prisoners in Kilmainham Gaol.

"She opened her first Catholic school for poor children in Gardiner Street, Dublin, in 1830."

Archbishop Diarmuid Martin, who is patron of her cause for canonisation, said he was delighted with the announcement.

He said Aikenhead was a member of an extraordinary group of Catholic women of their time, whose legacy continued today in education and in healthcare.