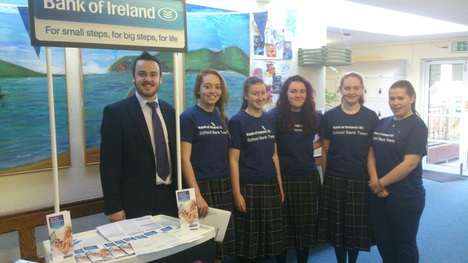 Background
As part of their Mini Company studies, Ms. Sinnott approached Bank of Ireland, Sutton. with a view to developing our long partnership with Bank of Ireland who sponsor our Student of the Year Award..  After a very fruitful discussion with Mark Beirne, Manager of the branch, it was decided to open a bank in the school.  Students could open a bank account, start saving and begin to organise their finances.  Students would also get a free ATM card that can be used for withdrawing cash from ATMs or for payment. The ATM card attracts substantial savings of 20% in Meteor, Insomnia, Dominos, AWear and other outlets.  There is also a competition for an IPad for all those who open an account. In return, Bank of Ireland, Sutton, will make a donation to the fundraising towards the Transition Year Musical.  The School will also receive a donation.

Selection Process
The commitment of our Transition Years was very obvious when thirty one students volunteered to work in the Bank.  This meant that they would have to undergo a selection process.  All students were interviewed by a panel that included Mark Beirne, Derek Fannin, Ms. Sinnott, Mr. Worrell and Ms. Crimmins.

On Monday 21 October, Mark and Derek met all the Transition Years in the Study Hall and thanked all the candidates for putting their names forward.  He noted that many of the candidates were of very high calibre and that they had a difficult task in selecting the various candidates.

Your Bank Officials
After a lot of deliberation, the following were selected
Congratulations to everyone!

The girls received 45 minutes training following their selection and each received an official letters from the Bank of Ireland in recognition of them achieving their positions.

On Tuesday, 22 October, after finishing work experience early, Ellen Keegan and Lisa Finn dropped in to visit all the classes.  They spent a considerable time telling the students about the bank.  Then on Wednesday, Lana May Fleming, Gillian Hogan, Ellen Keegan and Gillian Hogan visited the classes again. Roisin Yeates was not available as she was representing St. Mary's at Fingal's Comhairle Na nOg with Rachel Morrissey.  The girls are to be congratulated for the effort that they have put in promoting the bank.

School Bank Team following appointments with Derek Fannin (left) and Mark Beirne (Right).
Official Opening
There was great excitement when the bank opened today in the Concourse.  Derek Fannin met the team at 10.30 am to go through final preparations with the team.  Everything was ready to go at 11 am when the students went on break following Roll Call.  There was great excitement and the girls were queuing up to get further details and application forms while others had application forms completed. Such was the interest, that the Bank ran out of application forms and an emergency supply of application forms had to be photocopied.  Derek noted that he had never experienced such student interest in a school bank and paid tribute to the girls for doing such a good promotion of the bank.  Well done to everyone in the team.  It augurs well for the future.  The bank remained opened until 11.30 and then the team evaluated how the opening had gone.  An extremely pleased Derek took away the forms for processing

The Bank will re-open on Thursday 7 November at 11 am.  However, the Bank team will be busy in the days before distributing forms and reminding everyone about their next opening on Thursday.

Radio Interview
The team have an interview scheduled on Friday 8 November on NearFm.  Details below! 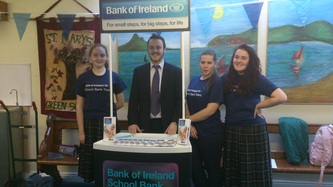 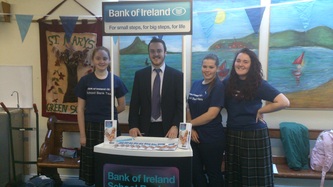 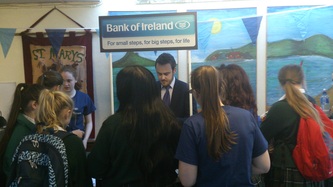 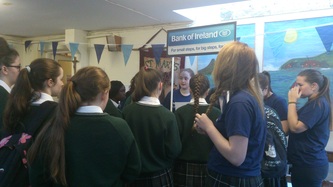 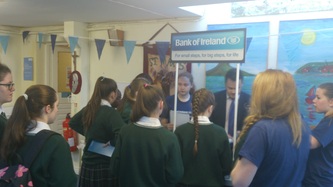 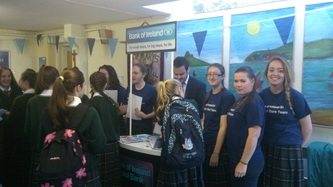 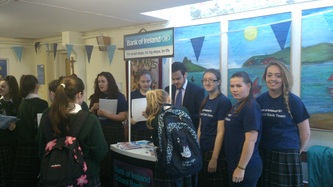 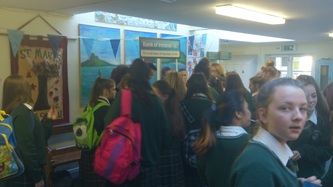 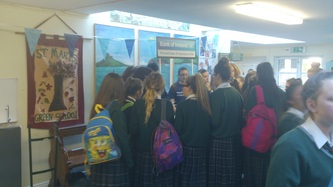 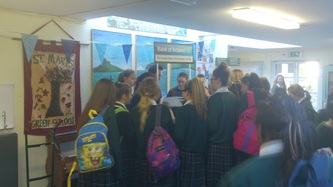 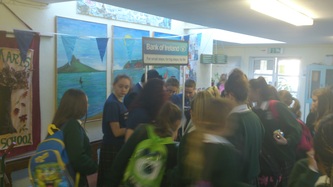 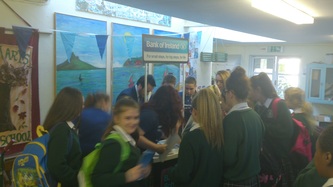 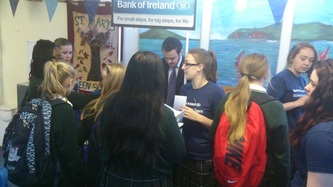 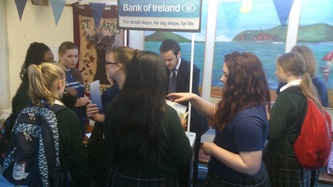 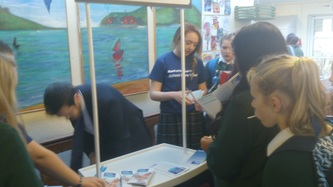 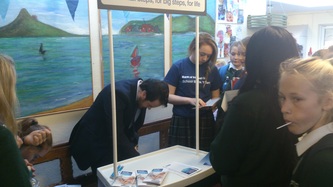 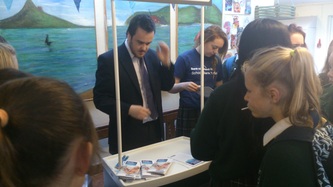 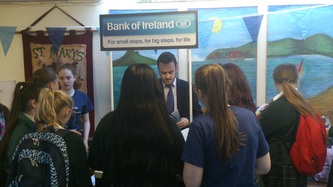 Unfortunately, Ellen Keegan was unavailable for interview as she was playing basketball for the Under 16 Team where she is Captain.  The Team won to make up for the disappointment.


The School Bank has opened many times and students are delighted to have their own school bank on premises.

On Thursday, 23 January 2014, Ms. Sinnott and the School Bank team will visit Bank of Ireland, Sutton for a tour of the branch by Manager, Mark Beirne, The girls will also have a walk-through of a 'day in the life' of branch banking. The visit will give them a good working insight into how the business works.